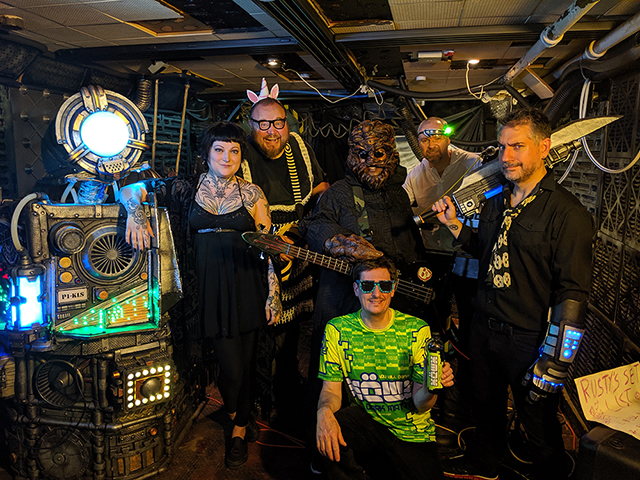 Are the League of Space Pirates a band of scallywags fighting against their sworn enemy Übercorp, the largest corporation the universe has ever known?

Or are they just a group of mild-mannered rock-n-rollers playing gigs across the galaxy, who just happen to be named after the aforementioned outlaws?

Join the crew and find out!

Captain Orlok – The leader of the actual league of space pirates and the lead singer of the League of Space Pirates band. Before becoming a space pirate, Orlok worked for Übercorp as a scientist in their highly secret new technologies laboratories.

Raith Pittas A.K.A. Parrot – The Captain’s mysterious right hand man and keyboardist for the band.

Mungo – An animate meat creature that has a long history with Orlok and also plays bass in the band.

Chroma – An orphaned girl with a secret past, she’s the Captain’s bodyguard and co-singer in the band.

Rusty Shields – One of the RhoD’s: the crew of the band’s tour ship the Detritus. He’s unaware of the League’s real goals and plays guitar in the band.

P1-KLS – A derelict Übercorp communications satellite was brought onto the Space Pirate’s tourship and now it’s part of the band too, of course.

From the twisted mind of artist Noah Scalin, creator of Skull-A-Day, comes a new history of the future, in the form of a band of badass anti-corporate space pirates who fight The Man while Kicking out The Jams! The League of Space Pirates is the bastard child of Doctor Who and Depeche Mode and they’re ready to rock your world.